As you may know event handlers are a common source of memory leaks caused by the persistence of objects that are not used anymore, and you may think should have been collected, but are not, and for good reason.

In this (hopefully) short article, I’ll present the issue with event handlers in the context of the .Net framework, then I’ll show you how you can implement the standard solution to this issue, the weak event pattern, in two ways, either using:

(The source code is available here.)

Before diving into the core of the article let’s review two items which are used extensively in the code: a class and a method.

Let me present you a basic but useful event-source class which exposes just enough complexity to illustrate the point:

For those who wonder what the strange empty delegate initialization is: it’s a trick to be sure the event is always initialized, without having to check each time if it’s non-null before using it.

So we’ll regularly have to trigger ourselves a GC, and to avoid duplicating plumbing code it’s been factorized in a dedicated method:

Not rocket science but it deserves a little explanation if you’re not familiar with this pattern:

So first thing first, let’s try to understand what’s the problem with event listeners, with the help of some theory and, most importantly, a demo.

Here is a detailed diagram of what happens under the hood: 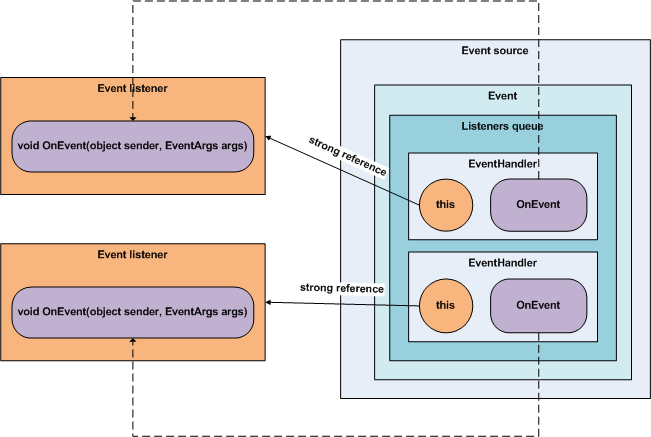 This is not an issue if you can control the life time of the listener object as you can unsubscribe from the event source when you don’t need the listener anymore, typically using the disposable pattern.
But if you can’t identify a single point of responsibility for the life time of the listener then you can’t dispose of it in a deterministic manner and you have to rely on the garbage collection process … which will never consider your object as ready for collection as long as the event source is alive!

Theory is all good but let’s see the issue with real code.

Here is our brave event listener, just a bit naive, and we’ll quickly understand why:

Let’s see how this implementation behaves with a simple use-case:

Here is the output:

Conclusion: indeed there is an hidden strong reference to the listener which prevents the event listener to be collected as long as the event source is not collected!

Hopefully there is a standard solution for this issue: the event source can reference the listener through a weak reference, which won’t prevent collection of the listener even if the source is still alive.

And there is a standard pattern and its implementation in the .Net framework: the weak event pattern.

So let’s see how we can tackle the issue in the .Net framework.

As often there is more than one way to do it, but in this case the decision process is quite straightforward:

Before .Net 4.5 the .Net framework came with a class and an interface that allowed implementation of the weak event pattern:

(Both are located in the WindowsBase assembly that you’ll need to reference yourself if you’re not developing a WPF project which should already correctly reference it.)

So this is a two step process.

First you implement a custom event manager by specializing the WeakEventManager class:

Then you make your listener class implement the IWeakEventListener interface:

This is a lot of words, but it translates to relatively few code:

Then our event listener:

Nice, it works, our event listener object is now correctly finalized during the first GC though the event source object is still alive, no more leak.

But this is quite a bunch of code to write for a simple listener, imagine you have dozens of such listeners, you’d have to write a new weak event manager for each type!

If you are fluent with code refactoring and generics you may have found a clever way of refactoring all this common code.

Before .Net 4.5 you had to implement this clever weak event manager yourself, but now .Net provides a standard solution for this issue, and we’ll review it right now!

(This class is located in the WindowsBase assembly too.)

Thanks to a good use of .Net generics the WeakEventManager<TEventSource, TEventArgs> handles genericity itself, without us having to reimplement a new manager for each event source.

As a consequence the resulting code is far lighter and readable:

There is only a single line of code to write, really clean.

The usage is similar to the other implementations, as all the stuff has been encapsulated into the event listener class:

And just to be sure it works as advertised here is the output:

As expected the behavior is the same as the legacy event manager, what more could we ask for?!

As you’ve seen implementing the weak event pattern in .Net is quite straightforward, particularly with .Net 4.5.

If you’re not using .Net 4.5, as the implementation requires some boilerplate code, you may be tempted to not use this pattern and instead directly use the C# language facilities (+= and -=), and see if you have any memory issue, and only if you notice some leaks then make the necessary effort of implementing it.

But with .Net 4.5, as it’s almost free, the plumbing code being managed by the framework, you can really use it in the first place, though it’s a little less cool than the C# syntax “+=” and “-=” but semantics is equally clear, and this is what matters.

I’ve done my best to be technically accurate and avoid any spelling errors but if you catch any typo or mistake, have some issue with the code or have additional questions feel free to let a comment.

One thought on “The .Net weak event pattern in C#”