As developers we often strive to build concise code in order to avoid useless ceremony that would distract from its purpose.

We do that by leveraging the syntactic sugar offered by the languages to reduce code verbosity and increase its expressiveness but it can become a trap and lead to code that does not do what is expected.

In this article, I’ll illustrate this point with a powerful C# feature: async methods.

END_OF_DOCUMENT_TOKEN_TO_BE_REPLACED

But naively applying the JavaScript Promises patterns I had used in the previous months I was bitten by a strange issue which forced me to use the quite exotic Unwrap extension method.

This article describes the issue, explains its cause, provides a fix with Unwrap, and finally provides a more modern version with the C# 5.0 async/await paradigm.

END_OF_DOCUMENT_TOKEN_TO_BE_REPLACED

Sometimes you want to have both for a parameter: the ability to omit it and to change it.
This is something COM supports but unfortunately this is not supported by C#.
Recently one of my customer needed precisely that for a COM API developed in C# migrated from VB6 where it was plug-and-play.
The original developers of the API had done a quick study and concluded that it was not possible with the new C# API and indeed it was not documented at all.
From experience I know that COM is not used a lot today and that resources are scarce, so, to be sure, I’ve done my due diligence and reexamined the issue, digging a little deeper and testing undocumented stuff.
I’ve finally found a solution that I would describe as a “trick”, because it’s not documented, and that I’ll present in detail in this article.
END_OF_DOCUMENT_TOKEN_TO_BE_REPLACED

END_OF_DOCUMENT_TOKEN_TO_BE_REPLACED

As a WPF developer for years I was recently concerned by the new direction chosen by Microsoft on its client platforms with the rise of the brand new WinRT framework.

I was concerned for good reasons: I’ve suffered from the collateral damages of the Silverlight failure, and as the proverb says “once bitten, twice shy”.
Since 2009 I have put a huge personal and professional investment in WPF, using it to develop LOB applications in the financial industry, and now I’m even providing training on this topic.
So as a professional developer and trainer the future of WPF is critical for me so I’ve studied this issue more thoroughly.

In this article I’ll share my findings with you, in a completely objective and transparent manner, and I hope you’ll provide your own facts, so that the community can have a better vision of the future of WPF.
In the last part of this article I provide some strategies for businesses and individual developers.

END_OF_DOCUMENT_TOKEN_TO_BE_REPLACED

.
I strongly recommend you read both of them if you intend to pass the certification.
Indeed both have been my main material to prepare for the certification and they have perfectly done the job.

This article is a complete review of MCSD Certification Toolkit (Exam 70-483): Programming in C#

.
This is the first book you should read because I think this is the one that will best prepare you to get the certification, but paradoxically the worst from a technical point of view, and you will quickly understand why.

END_OF_DOCUMENT_TOKEN_TO_BE_REPLACED 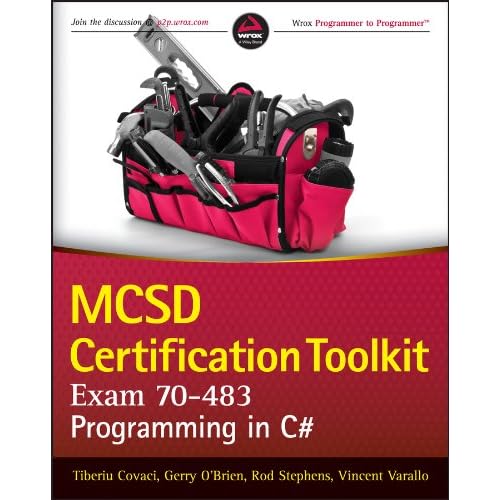 END_OF_DOCUMENT_TOKEN_TO_BE_REPLACED

I’ve recently wanted to demonstrate the relevance of the .Net ReaderWriterLock[Slim] synchronization primitives.
It’s good to hear from the vendor that it’s better, faster, stronger, but when you can it’s always good to evaluate it yourself; not that I don’t trust vendors, but because I like to have hard numbers, particularly when I assert something that can be critical for my participants’ developments.

So I’ve built a small, simple and I hope relevant benchmark to measure the performance impact of ReaderWriterLock[Slim] compared to the naive and uniform use of a Monitor using the C# lock construct.

I wanted to check these two things:

In this article I’ll explain the rationales behind the benchmark, how I’ve implemented it and finally present the results.

END_OF_DOCUMENT_TOKEN_TO_BE_REPLACED

First a warning, this is a difficult article which goes really deep inside the .Net machinery so if you don’t get it the first time (or even the second or third time…) don’t worry and come back later. 🙂

For a training session I’ve taught at the end of last year I wanted to demonstrate some subtleties of multi-threading, and more specifically some memory visibility issues that should cause a program to hang.
So I developed a small sample that I expected would be showing the issue, but instead of hanging as expected the program completed!

After manipulating the program further I obtained the behavior I wanted, the program was hanging, but it still didn’t explained why it managed to complete with my original version.

<SPOILER>
I suspected some JITter optimizations, and indeed it was the case, but I needed more information to completely explain this strange behavior.
As often, the StackOverflow platform was of great help; if you’re curious you can have a look at the original SO thread.
</SPOILER>

In this article I’ll “build” and explain the issue step by step, trying to make it more understandable than the SO thread which is indeed quite dry.